One of the most common questions we are asked is "What do the Red and Green arrows in the rankings mean?" There are two columns in the results screen, one is labled "S" for speed and the other "F" for finish. If a horse has run three races in a row that show improved speed or improved finish position he earns a Green Up Arrow, if his last three races show declines in speed numbers or finish positions he gets a Red Down Arrow. The idea is to show you at a glance if a horse is off form or in form. Horses with Green up arrows are on the improve and those with red arrows are in decline. However, you need to look closely and not blindly include or toss a horse based solely on the arrows. If a horse were to earn a red arrow for speed and his last three speed numbers numbers were 100/99/98 then you wouldn't consider that a horse in serious decline. Also if a horse finished 11th, 10th, 9th in his last three races, then he is improving! But, probably not a contender today. 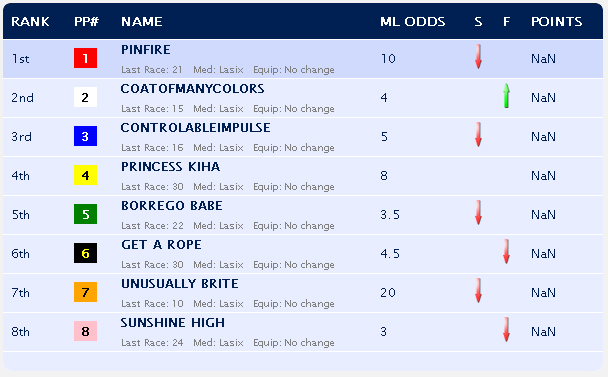 All of the horses with the exception of #2 and #4 have Red Arrows, and many of them are showing declining speed numbers which is worse than declining finish position. In a case like this you should look very closely at those two horses to see if they are contenders within your normal handicapping process - if they are then you have found a race that has excellent potential for a big payout.

As it turns out - both the 2 and 4 were serious contenders and the race was played as a Superfecta, the bet was 2,4 / 2,4 / all / all. We knew 2 of the horses had to fill out the super, but didn't have a strong opinion about which ones, so we hit the ALL Button and hoped for a bomb. The horse that ran 3rd went off at 49:1 and made for a nice superfecta: 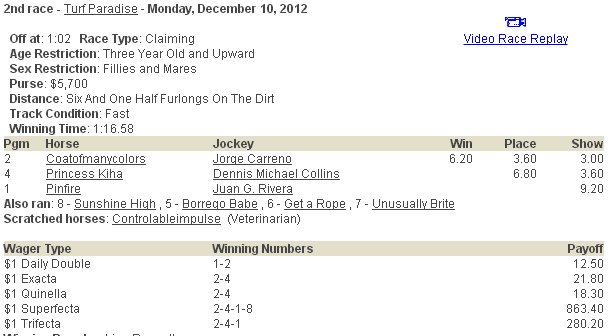 Use the arrows to point you towards a race where there is potential for chaos. Use that to your advantage. When the majority of the filed in a race is in bad form, it can mean monster payoffs if you play it the right way.