We have improved the horse information screen at Betmix, and the new features will allow you to dig deeper into the horse's past performances to spot a potential winner.

When you click on a horse's name in any screen (except the All Races Report) the horse info box will pop up. This is where you can scratch a horse and see more details about their past performance data, connections, bloodlines, etc. 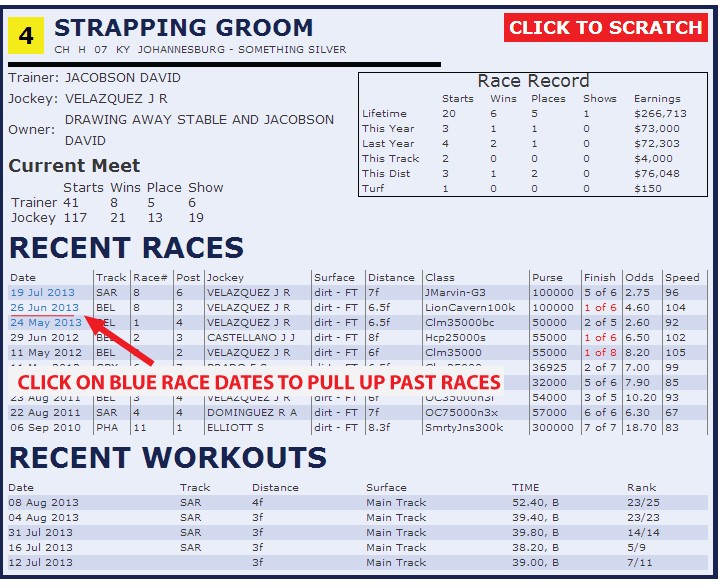 We have expanded the past race data to 10 races, added race number, post position, Jockey, track condition and number of starters. The most important addition is the ability to click on past races. This will allow you to easily open up a past race and see what conditions are similar to today’s race.

The dates for races from the current year will appear in Blue. When you click on the date, that race will open up in a new window.

HOW CAN CLICKING ON A PAST RACE HELP ME HANDICAP?
The info box in the example above is for STRAPPING GROOM who ran Aug 12th at Saratoga in the 8th race. He won and paid $9.20. Looking at the race info box we see that he won on June 26 at Belmont, and lost on 19 July at Saratoga. What clues do those races provide about how he may run today?

If you click on the Belmont race on 26 June, it will open in a new window. We know that he won that race, so we can click on the RANKINGS button to see what factors he was ranked highly in on that day.

Strapping Groom was #3 in that race, and we see that he ranked 1st in several Pace Categories. Last E1 and E2 as well as Avg. E1 and E2. He had an early pace advantage and won the race.

In the Saratoga race on July 19th, Strapping Groom (#9) ran 5th. The pace scenario was much different for him on that day and he did not enjoy an early lead.

Now, look at the pace scenario for his race on August 12th

Yesterday’s Pace scenario looked more similar to the winning race in July at Belmont. He was 2nd in last E1, and First in last E2 as well as 2nd in Avg of E1 and E2. The pace was going to set up more to his liking than it did in the July 19th race at Saratoga, it did and he won paying $9.20.

As you can see, using the links to compare previous winning races to today’s races will provide you with another powerful handicapping tool. This is just one example of how you can use the past races to gain an edge in today's races. You can also look at past races for a big odds on favorite and see if he might be vulnerable if today's race does not seem as ideal for him as his past races.