Analyzing the data is the key to solving the puzzle

When handicapping a horse race most people look at the relative abilities of each horse and judge them according to the past performance information they see in the racing program.  Information about where and what types of races each horse has been in recently, how fast the horse ran, the horse's running lines, information about the trainer and jockey and several other pieces of information can be considered by the handicapper as they try to figure out who will win. In a race with 10 horses you could potentially be considering several hundred data points for the field and managing that type of data load using only your head is extremely difficult.

Lets assume that you studied the racing form for 20 minutes and decided that horse #8 was going to win the race.  You place your bets - and as you predicted, #8 wins the race by 2 lengths and rewards you with a $10.00 win payoff. Congratulations!  Your work paid off, and now you are on to the next race.  You start the process all over again... Can you duplicate how you handicapped the last race again?  If you were only judging the horses by a few factors you probably could, but if you were considering multiple handicapping factors and assigning a different level of importance to each one it may be hard to analyze each race in the same way.  Or, the way in which you handicapped that winning race may not be the best way to handicap the next race.  If that race was a 6f dirt claiming race, and the next race is a 10F turf stakes race, chances are that you need to consider a different set of data points.

Which handicapping factors are important in each race type?

At a typical race track you have sprint races (races run at 7 furlongs or less) and route races (8 furlongs and longer - a furlong is equal to 1/8 of a mile).  Some are run on dirt, some on turf and some tracks have a synthetic all-weather surface.  You have maiden races, claiming races, allowance races, stakes and several other variations of class levels.  The factors that are important in one race may not mean much in another.

In order to determine the most predictive factors for each race, Betmix looks at all of the similar races in our database and ranks each individual factor in order for its ability to accurately predict which horse will win. As an example, if you were looking at 6 furlong Allowance Optional Claiming races run at Churchill Downs Betmix would be able to tell you that the most important overall factor for predicting winners is Last E2 Pace.  The next most important factor would be the average of the best 2 speed numbers from the horses last 3 races.  Betmix currently looks at 45 factors.  These factors represent data for Speed, Form, Earnings, Trainer/Jockey, Class, Pace and Pedigree. When you know which factors have historically been most predictive for the race you are looking at you can focus on those horses who are ranked highly in those areas.

Using the Betmix software to analyze with accuracy and consistency

After looking at the race you are getting ready to handicap and determining which factors are the most important you can begin to construct a Mix.  A Mix is combination of factors and weights that tell the computer how to handicap the race. If you think of a Mix as you would a recipe it might make more sense.  A recipe for a cake might call for eggs, flour, sugar and butter.  A Mix for a 8 furlong turf allowance race at Saratoga might call for Last Late Pace, Best Speed on Turf, Jockey Current Year, Turf Pedigree and Average of Last 3 Race Classes.  Think of the factors you need to use as ingredients in your handicapping recipe.  The weight (importance) that you assign to each factor would be similar to how much of the cake ingredients you used.  In baking a cake you could use the correct ingredients, but in the wrong amounts, and you would end up with a mess. Same thing holds true for handicapping a race. 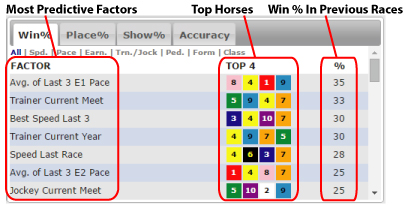 The most predictive factors will point you in the right direction for adding the right "ingredients" to your mix, but you still need to know how much of each ingredient to use.  The amount that you would use is the "weighting" in Betmix.  As you build your mix you assign a numerical weight to each factor by using the sliders or by typing in a value by the factor name. 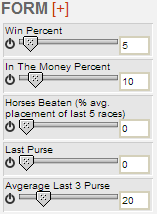 You can see a graphical representation of your mix, that shows you in a pie chart format how the factors are being weighted. 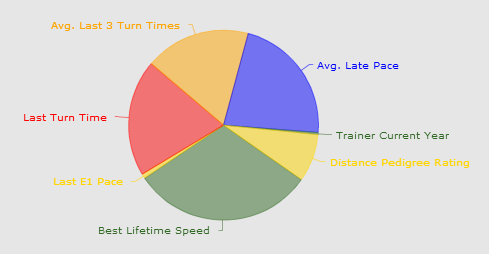 How do you know if your Mix will work?

The best way to test a mix is to run it against several similar past races.  You will then be able to see how accurate the mix was.  How many times did the top ranked horse run 1st, 2nd, or 3rd? How many times did it hit the exacta or trifecta? Would you have shown a profit overall?

Testing your mix is easy.  When you are looking at a race, you can click the "Race Profile Report" button and that will launch a screen that shows you all previous similar races.

After your profile report has launched you can apply a saved mix to that report, or create one on the fly.  The results box shows you how well your mix would have done for the group of races you are looking at.  Each time you make a change to your mix by either selecting a new factor or changing the weight of existing factors the results box will update.  The image below shows you the results of applying a mix to the last nineteen 8F dirt Allowance Optional Claiming races at Churchill Downs. 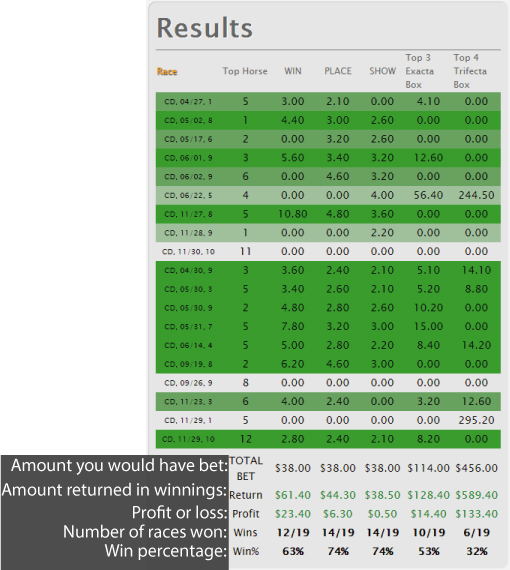 You can modify this mix on the fly to see how adding a factor or increasing or decreasing the weight of a factor effects your overall results.  When you think that you have created the ideal mix for this race type you can save it and then apply that mix to similar races in the future.  When you save a mix you can give it a name and also define it by racetrack, distance, surface and race type.  When you are looking at an upcoming race you can easily sort your mixes to find the best option for the current race based on those criteria.

The handicapping software at Betmix allows you to create mixes and test them against historical races to see if you are using the correct factors.  Since the computer is handicapping each race the exact same way (using the factors and weights you specified) you will not make errors and you will know that in future races you will be using the exact process that has worked for you in the past.

Experiment with Betmix by taking a look at the free race of the day, or learn more about how to use this handicapping software by watching some handicapping tutorials.