We were exchanging e-mails with a user on Saturday who was playing Aqueduct. This was a new user, and they were getting their feet wet with Betmix by using the Blend Dirt mix, available in the MixLibrary to monthly subscribers (Blend Dirt-ML).

When helping new users we try to get them to focus on one Mix and one track to get used to the way Betmix ranks horses. We tell them to play horses that have a big point advantage over the rest of the field, and focus on races where there is a small group of horses within 10 points of the top ranked horse.

The user asked us to take a look at the 3rd Race at Aqueduct on Saturday March 9th, and wanted to know if we would play that race, and if so, who we would bet on.

Using the Blend Dirt Mix, here are the rankings of the horses: 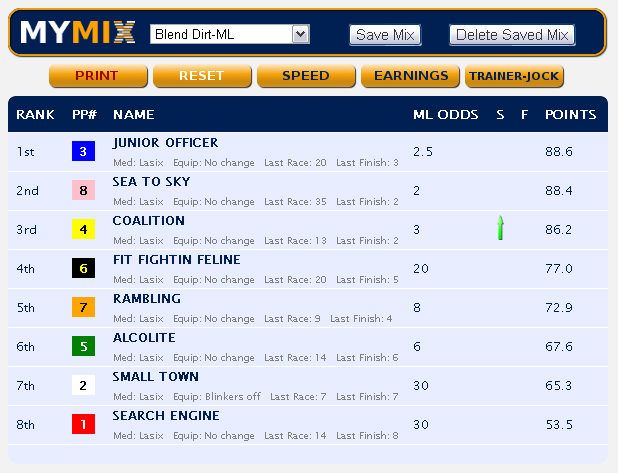 There is not a standout as far as a TOP HORSE (ranked at least 5 points better than the second ranked horse), but there are only 2 horses within 10 points of the leader. This is clearly a 3 horse race. And the obvious bet is the 4 horse.

Why bet the #4 Coalition, if he is not the top ranked horse? Was the question we got back, and the answer should be obvious. The #4 is only 2.4 points behind the leader, and he has the only Green Up Arrow in the race for speed (meaning that he has shown improved speed ratings over the last 3 races). On top of that, looking at the ML odds, as well as the actual odds at the track before post time he was the longest shot of the 3. The 8 was even money, the 3 was 2:1, and the 4 horse was 7:2. He was clearly the value play in the race.

There are other factors that put the #4 into GREAT BET territory. He finished 2nd last time he raced, and we love to bet horses that finished 2nd in their previous start in conditional races like this one (NEVER WON A RACE OTHER THAN MAIDEN; CLAIMING; OR STARTER OR WHICH HAVE NEVER WON TWO RACES). This means he ran 2nd against similar company last time but just missed, and should be among the best today. Looking at all of the horses in the race, only the #8 and the #4 were 2nd in their last start.

A good habit to get into when handicapping with Betmix is to isolate a single factor to see if your pick holds up against the field. In this case, we want to know how fast he is at this distance (1 Mile) so we would turn on just BEST SPEED DISTANCE to see how the #4 stacks up against the rest of the field. 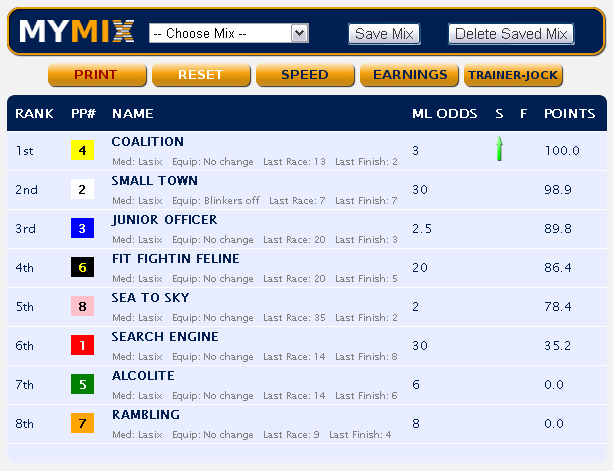 The #4 Coalition is the fastest horse at the distance. We are really starting to like him now. Also, notice that the longshot #2 Small Town is ranked 2nd here and has a morning line of 30:1.

Finally, lets isolate Avg of Last 3 Late Pace to see if #4 will be running late in this 1 mile race: 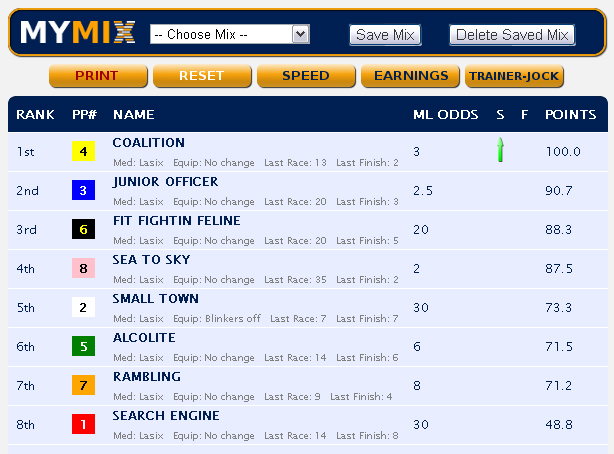 The #4 is a standout on Late Pace, almost a full 10 points clear of the 2nd ranked horse.

This horse has moved into GREAT BET territory and we email back the user that not only should he bet the #4 to win, he should bet him heavily.

Of course it all worked out like it should (not going to happen every time unfortunately) but when you get a race where there only appear to be 3 contenders, and you can make a very strong case for one of those horses by looking at him in single factor screens (Best speed distance and Avg 3 Late Pace) and he has the only Green Up Arrow for speed in the race (Improving!), and he ran 2nd last time in a similar condition, and to top it all off he has the highest odds of the 3 contenders in the race. When you find a situation like that, you have to take advantage of it.

The #4 horse Coalition did what he was supposed to do, rallied late to get the win and paid a very nice $9.50 for a horse that checked all the boxes as a best bet.

The lesson here is to use the numbers to find the value bet. Look at all the factors and ask yourself if betting the top ranked horse is really the smart play. Betmix is a tool that will separate the contenders from the pretenders for you, and by using common sense in conjunction with the cold hard facts Betmix provides you can often find some stand out plays and some live longshots. Remember that #2 horse that showed up 2nd in BEST SPEED AT THE DISTANCE? He ended up running 4th and making the Superfecta a pretty easy call with the three favorites for $159.